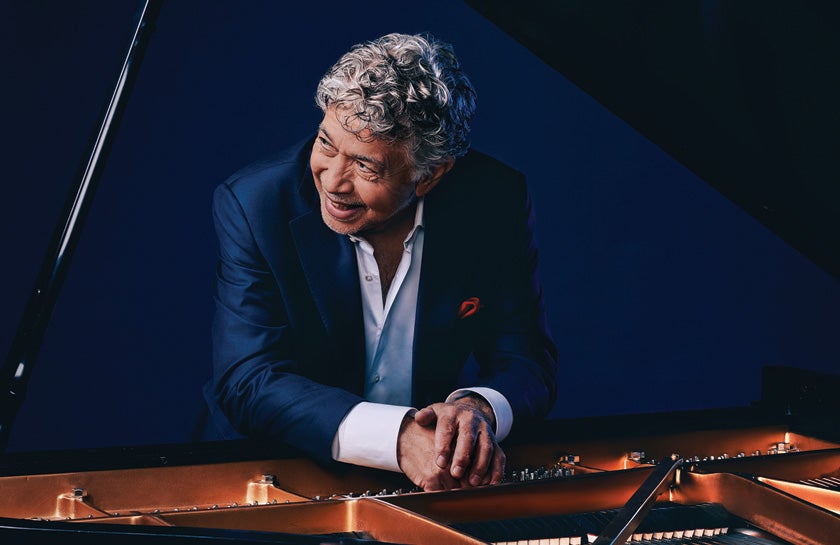 Jamaican-born jazz pianist, Monty Alexander brings his singular swinging style to the Shubert Theatre for a globe-spanning evening of melodic virtuosity informed by his individualized synthesis of jazz and Jamaican musical styles. Arguably the most successful and renowned Jamaican jazz musician of all time, Alexander’s musical nods are a distinctive balance of straight-ahead jazz stylings and bright piano work that shine brightest when he's playing something with a ska or reggae rhythm.

Nearly sixty years after he moved to the United States from Kingston, Jamaica, this Grammy-nominated pianist is an American classic, touring the world relentlessly with various projects and delighting a global audience drawn to his vibrant personality and soulful message.

Approximately 80 minutes with no intermission.

From Jamaica to Jazz to the World

The sprawling program is an incomparable experience driven by Monty Alexander’s energetic playing and insightful, narrative interludes—creating a can’t-miss chronicle of the living legend. For Anthony McDonald, a second-generation Jamaican and the Shubert’s new Executive Director, Alexander’s upcoming performance signals an exciting turn and return for the landmark theatre. “The Shubert is celebrated for presenting first-rate theater, but its history tells a more wide-ranging story where ballet, classical, and jazz legends jumped at the opportunity to perform here,” he shares. Adding that, “Louis Armstrong and Ella Fitzgerald once graced Shubert's stage, and Monty joining us is both a celebration of his greatness and an opportunity to revive that history-making.”

Monty Alexander, Jamaica’s Commander of Distinction and Hon. Doctor of Letters, will present a musical storytelling and autobiographical history from his early days in Jamaica (1950’s) to his intersection with entertainment legend Frank Sinatra (Miami 1962) to his collaborations with Jazz masters, Ray Brown, Milt Jackson, Quincy Jones, Dizzy Gillespie, Sonny Rollins, and with other entertainment legends such as Tony Bennett, Clint Eastwood and Natalie Cole. With a special memory of that time he was called upon to play George Gershwin’s Rhapsody in Blue with a full symphony orchestra.

Documented on more than 75 recordings and cited as the fifth greatest jazz pianist ever in The Fifty Greatest Jazz Piano Players of All Time (Hal Leonard Publishing), the Jamaican government designated Monty Alexander Commander in the Order of Distinction in 2000, and in 2018 The University of The West Indies bestowed him with an honorary doctorate degree (DLitt) in recognition of his merits.

Alexander is most widely known as an upper echelon master of the swinging piano trio function, as he has demonstrated with several top-shelf groups, including iconic units with bassist John Clayton and drummer Jeff Hamilton (“Montreux Alexander ‘76”), and with the legendary bassist Ray Brown and guitarist Herb Ellis (“Triple Treat”).

Influenced by Duke Ellington, Oscar Peterson, and other jazz piano giants, Alexander is an autodidactic luminary whose unrelenting investigation of a distinctive, cross-pollinated sound has spawned a prolific recording and live performance career powered by his roots and influences.

A perennial favorite at the Montreux Jazz Festival where he has performed and headlined concerts 23 times since 1976 his spirited conception is one informed by the timeless verities: endless melody-making, effervescent grooves, sophisticated voicings, a romantic spirit, and a consistent predisposition, as Alexander accurately states, “to build up the heat and kick up a storm.” In the course of any given performance, Alexander applies those aesthetics to a repertoire spanning a broad range of Jazz and Jamaican musical expressions.

In consideration of the health and well-being of patrons, artists, volunteers, and staff - the following health and safety policy will be in effect until further notice:

FULL COVID-19 VACCINATION: will be required for patrons, as well as staff, volunteers, performers, backstage crew, and all others entering the Shubert Theatre.

IF UNVACCINATED: please bring proof of a negative COVID-19 PCR test taken within 72 hours of the performance start time.

FACE MASKS ARE REQUIRED FOR ALL regardless of vaccination status, while inside the building, except while actively eating or drinking. A properly worn mask completely covers the nose and mouth, is secured to the head, and fits snugly against the side of the face.

How Do I Print My Tickets At Home?

The print at home tickets will arrive in a separate email from tickets@capa.com. This usually comes 5-10 minutes after the order confirmation email, and it will have the tickets attached as a PDF file. Be sure to print all pages if there are multiple tickets in the order.

Because of the attachment from an unknown email, it can sometimes be filtered as spam or junk, so we suggest checking those folders. If the email with the tickets doesn’t arrive after 24 hours, contact the Shubert Ticket Office at 203-562-5666, and they can re-send it or have the tickets held at the Box Office for you.